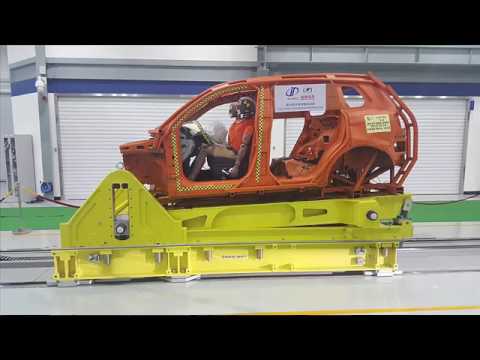 Crosswalks are meant to protect the safety of pedestrians. As such most jurisdictions have laws which give a pedestrian in a crosswalk the right-of-way. Crosswalks are also usually clearly marked. The bottom line, however, is that the safety of the person in the crosswalk usually depends on the alertness of drivers. If a driver fails to observe the pedestrian’s right-of-way the resulting accident could leave the pedestrian with substantial injuries. Given the nature of the injuries often associated with these accidents it may be possible for the victim to receive substantial compensation for those injuries and the resulting impact on their quality of life. Take, for example, the two documented cases examined below.

The first case involves a truck hitting a woman who was in an intersection. The accident occurred during the night time. The woman’s injuries included a form of amnesia which prevented her from having a memory about how the accident occurred. The amnesia was brought about from a brain injury for which she had to undergo surgery. The woman also suffered a fracture to her ankle. Her total anticipated medical costs for treatment will come to more than $3.5 million. The victim, a woman in her late 40s, was a professional earning approximately $61,000 a year. Because of the disability resulting from her injuries she was not able to return to work following the accident. Her lifetime anticipated loss of earning capacity amounted to approximately $1.9 million.

The law firm that handled this case reported that the driver of the truck did not show up for trial. The other defendants in the trial included the owner of the truck as well as the truck rental company. Although the defendants had taken the position throughout the case that the victim had not had a green light and was not in the marked crosswalk when the accident happened the failure of the driver to show up for trial made this a difficult position for them to win on. The case ultimately was resolved in a settlement in the amount of $2.6 million.

In the second case the driver of a bus decided to make a left turn at an intersection in which a woman was crossing the street. The woman was in a marked crosswalk at the time. The defendants in this case, which included the driver of the bus, the driver’s employer, and the company that owned the bus, took the position that the victim had not been in the crosswalk and that the driver’s view was impaired due to lighting conditions at the time of the accident. They claimed that, in fact, the victim was better positioned to avoid the accident. The victim was left as a quadriplegic from a spinal fracture that occurred as a result of the impact. Because of head trauma she was not able to remember how the accident occurred. Her total medical expenses are anticipated to have a net present day value of approximately $11 million. The law firm that represented the victim in this matter documented that they were able to achieve a settlement in the case for the victim and the sum of $9 million

These cases illustrate some of the common defenses raised in accidents involving pedestrians in crosswalks. With a thorough investigation of the accident, expert testimony, and some common sense, it may be possible to discredit the defendant’s position and thus achieve a recovery commensurate with the injuries suffered by the victim.